It’s shocking how time can get away from one; there are other updates, but the short of it is that we’ve been in anchored off of Olhao, Portugal , for the past several days, which is a southern Portugese town, near Faro, is all generally popular with local/European tourists, and has an extensive set of sand bars that are used by beach goers (the ones that don’t get flooded at high tide), and by aqua-farmers — mainly clams — on the ones that do get flooded.

Leading up to this had been a fairly intensive period of work on getting the boat ready, so being here is an opportunity for a bit of R&R while waiting for the weather window to open.

We’ve got a window opening Saturday (possibly “today” by the time you read this), and we’ll be deciding if we’re going to make the jump in them morning; if not then, the next likely chance is the 11th.

This all leads into some interesting discussion as to tools that sailors have now, that folks never used to have.

Nick’s grandfather built an experimental 3 hull catamaran in England, and set out down into the Bay of Basque (north of Spain, on his way to the southern latitudes, where he then planned to go across the Atlantic) — when he ran straight into a very nasty patch of weather.   With his brother, Nick’s mom, and a baby Nick on-board. Generally, you have to be pretty crazy or dumb for this to happen to you these days.

We’re using a variety of information sources to plan; the most important is Windy.com — this is a web app that brings together raw weather data (OpenGribs, etc), the results of many predictive models, and gives you impressive tools to create views of all this data at once, and scroll backwards in time, or forwards into the modelled future, compare different models, and so forth.

I am of course, extremely amateur at this, and can only try to report what more knowledgable folks have said accurately.

The main things for sailing seem to be as you’d expect — wind, waves, pressure, tides, currents, and (to a lesser degree in these climes) temperature.

Pressure is the hand that drives wind; air in aggregate is a fluid, always trying to fill in the low-pressure areas, trying to get away from high pressure, piling up here, and leaving a gap there — big storms are areas with really low pressure in the middle, and vast amounts of air attempting to circle the drain, fed by air being pushed off of high pressure areas — but unlike emptying the kitchen sink, there’s no actual drain at the bottom, so it ends up swirling around quite quickly…  (it makes me recall Bernouli’s Principal — as speed goes up, pressure goes down; I’m guessing that in weather there would be lots of feedback loops caused by the relationship between pressure and air-speed.)

West of Gibraltar, there is a pattern of very high pressure that tends to hang around, called “Azores High”, and it tends to shield folks heading south from Portugal/Gibraltar from a lot of the stuff that happens in the North Atlantic. This is handy, and this week, it’s doing it’s normal thing, apparently.

A predicted model for wind, for the overall world, at ground level, overlaid with predicted air pressures.  Note the line of blue dots in the middle — this is approximately our route to the Canaries.  There’s a kind of “sandbar”of pressure, about 1024 kpa — that’s the Azores High, and that bit like a bruise is a major storm in the north Atlantic.

Down the coast of Europe and Northern Africa, the winds tend to blow south, then turn and head across the Atlantic.  The general verbal directions in days of yore were “Head south until the butter melts, then turn west”. If you headed west too soon (eg: made a straight course from Gibraltar to the Carribean), then you could find yourself “becalmed” (sitting in the middle of a placid ocean, with absolutely no wind to drive your sails) for an extra week, or two, who knows!

This is the exact same view as above, except that we’ve gone from ground level to 13.5 km above the surface — and we can really see thos major high-altitude winds.  If you look closely, you can see the southern trade winds flowing from the coast of Africa to the Carribean.

These days, most sailboats have a set of “iron sails” on board (hint: “iron sails” require diesel fuel to operate, of which Otoka has about 450 L), and radios, and satellite comms, so being becalmed is more an irritant than anything, these days, though I’m sure maritime history has examples of folks who died from overly calm weather, back in the “good ol’ days”.

In any event, the wind is predicted to be medium to strong, but nothing unmanageable this coming week.

Waves are a big concern as well — we’re looking at waves of up to around 3-4 meters (9-12 feet), with periods ranging from 9 to 20 seconds, mostly coming from behind us. When you look at waves in feet, it turns out that if the period is numerically larger than the height of the wave, it’s generally reasonable. If the period is the same or less than the height in feet, then you are generally in for a rough day.

Windy predicts sea states in detail, but it seems to be me that it’s pretty nuanced — you click into detail, and find that you’ll have multiple sea conditions coming together + wind, and somehow it turns that into an aggregate prediction.

Windy does not attempt to predict currents; there was an app that we tried for our leg to Gibraltar, and on our way out of Gibraltar, and it was completely at odds with observed reality, so that was a bust — the almanac, on the other hand, seemed to be on the money. This is, I imagine, part of why harbour pilots are confident that they’ll still have jobs for some time to come.

Another major source of data is the Navionics chart plotter app — which is what we actually navigate with, and allows us to know where we are likely to be, when, so we know where to look on Windy.

Also, we can only leave at certain times — the area we are in is tidal, and the entry is narrow, so while the tide is changing, getting a boat like ours in and out is not a safe thng to try — around 8am will be a slack high tide, so optimal for heading out.

On top of this, a member of the group of boats that Otoka is a part of, is a professional meteorologist, who has a great deal of experience looking at the whole data package and understanding how it hangs together — Windy shows you not only what’s happening at sea level, but also will let you scroll up to high altitudes, so you can see the trade winds booking along, for example.

Anyway, add it all up, and it looks like it’s a good time to go.

If we’re underway, you’ll be able to at least watch us move, via our satellite tracker device.

As an aside, I was playing with a tool attempted to get offline editting for posts that include media and such, and it nuked all my pending drafts, so that was a bit of a blow.  As such, you’ve all received fewer updates than you might have anticipated.  Will do some rewriting, and just doing them in my normal tools this time, thanks.

For our outro, some good news — during my time here, I made a new best friend at a cafe by the anchorage, where they sell cappuccinos for 1 Euro: 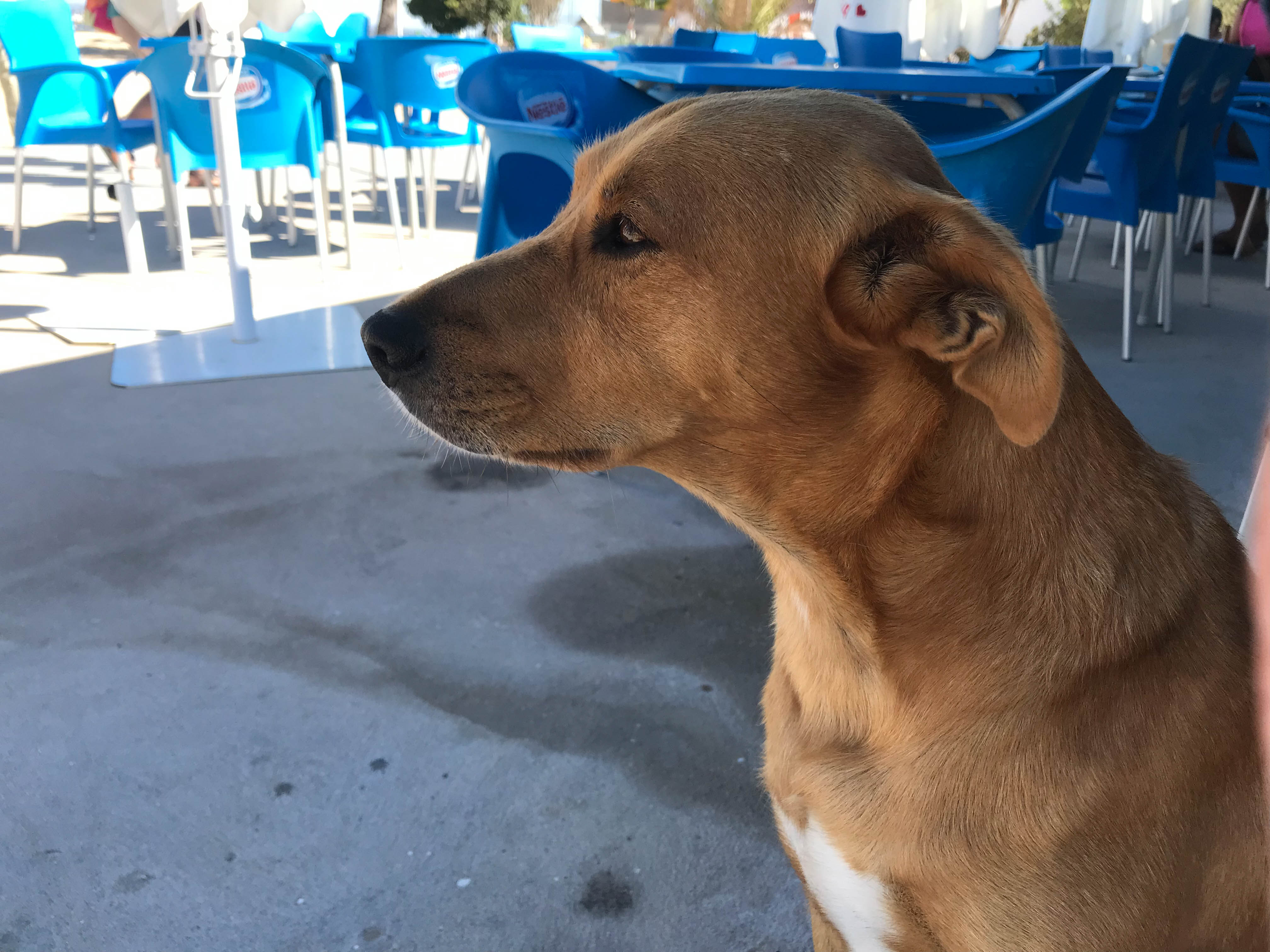 “I didn’t eat your draft blog posts, I swear.”

He didn’t seem attached to anyone in particular, and he liked being scratched between the ears.