Guest Blogger in the House – On the way to Otoka

I’m Cedric, Sarah’s most geographically proximate sibling, presently. I’ve set out to join the boat, do some of that “guest blogging” that was so popular in days of yore. All y’all don’t necessarily know me, but hopefully you’ll find my posts an interesting alternative view of what’s happening out this way.

It took a few days to get things sorted on the platform, so there’ll be a few quick catch up posts, and then things will settle down a bit.

Ended up sleeping until about noon local time, about 14-15 hours. Headed out for coffee and pastry — seems that it’s easier to find beer and tapas for lunch, but ultimately won through!

As it turns out, there is a cafe right in the building that I’m in, so I didn’t have to go nearly as far as I went.

This is a pretty standard street in central Malaga.

The pastry is what Steph & I came to think of a “Spanish style” when we were in San Sebastián, and had a chance to compare with the French stuff right across the border; very good, but with an ineffable sense of dry/stale. As in San Sebastián, “coffee” is from a proper espresso machine, is smooth and reliably lovely.

I had intended on getting signed up for Bici (city bicycle system), but (as a foreigner) I need to register in person, which is only possible on week days. So…. instead I signed up for Lime Scooter!

This is my first Lime Scooter. It was surprisingly easy to drive (those handlebars are the key to survival for non-skateboard people!), and was set to a max of 22 km/h, which took a while to attain, and it was very easy to come to quick stop (there is an authoritative mechanical brake on the handlebar).

I found a big industrial building down by the port that was entirely empty, so I figured it’d make a great photo location.

When it comes to street art, Malaga isn’t a patch on, say, Paris – more gang tags whimsy, on a first impression. I did come across a couple lovely things all the same:

There are lovely alleyways, lots of plants out and about, and exciting public infrastructure. I was taken by some bridges that were entirely planted out with a built-in irrigation system, for example. I happen to be near a huge train and bus station (which I will likely be availing myself of tomorrow — I need to figure out schedules today!)

This is Spain, and it does have the heat, and it does have people up late — walking along the shore (and anywhere, for that matter) at almost 10pm, and there were lots of folks out, including young kids; it can be so common back home that kids are usually in bed by 7 or 8 PM, that it was striking.

The shore is especially humid, and has a bit of a mist often hanging around it; with the lights at night, it’s otherworldly.

As an adventurous omnivore, it’s easy to love tapas … have a little bit of everything, and see if you can try it all. There are many cosy little shops that sell basically beer and small random dishes, and I wandered into one last night (4.5 stars in Google!). Nobody spoke any English, and my Spanish… I remember less than anything from San Sebastián, and my brain keeps saying “Oh hey, you are apparently somewhere foreign! Why not trying saying a random word in French, which you don’t speak either! Tres Bein! Oui!” ! . As far as cost goes, the place I’ve been to was 1 euro per tapa, 1 tapa free with every beer purchased.

My whole selection (about 7 dishes and 1 beer) set me back … like, 10 Euros, like, man. And that Victoria beer — dang, if it wasn’t just perfect for hot weather, light hop, clean taste, a bit of malt and sugar. Would travel back in time and do it again.

This place is not without its mysteries though…

So … check that out carefully. Think about it for a sec. I’ll hold.

Ok, so how does that happen? Obviously, a plate driven press, it would be impossible, so a digital press would have been used. But … it’s printed on opaque stock, so it would never be possible to see it properly from the other side (and you can see that it’s mounted on a cardboard back anyway, in this case). And nobody would mount a poster like that such that you could only see it through a mirror. And there were many of the poster up, but only one reversed… Did some wag at the print house reverse the file, and print some for fun?? And also, someone’s Cup of Care may be getting a little low — perhaps a hug from a branch manager would help?

Anyway, as in Paris, there is street-side side mini-shops, at least to some degree. In Paris, we noticed that the shops where basically wooden bins along the river and such, looked very … organic by this point; along this road, they are architectural/engineered steel structures. I liked this flower shop, for example. None of the others were open, but presumably Sunday mid-afternoon is not “Peak Impulse Shopping” time.

And now comes the tedious housekeeping stuff that makes it all go — figuring out how to get to El Ejido (I wonder if it’s anything like getting to Carnegie Hall?), updating firmware on the GPS thing (figuring out more stuff about how the feeds work, what Garmin MapShare options all boil down to), trying to figure out what sort of thingy will will work best for keeping everyone interested up to date, doing some writing, maybe push out another quote for work, maybe a nap, perhaps a little lunch? Dinner? (I’m fashionable by Spansh standards — breakfast at 2 PM, lunch perhaps about 8 PM?)

For our outro, I have a moment of Zen in the form of this lovely utility hatch:

You see, the gecko is the cable head-end sending the signal, and the long tongue represents the wires carrying the signal to the customer, and the tip of the tongue is the receiver box/modem… yes? 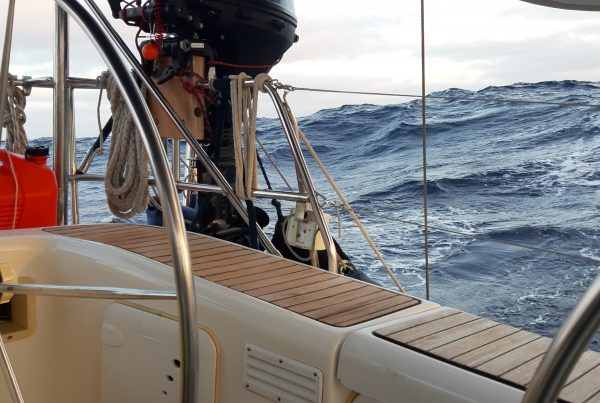